DIY Paint and Other Summer Mods

So the cars only been on the road for a few years now and i'm not particularly happy with the paint/body. When we originally started the re-build, the body was in a very bad state, absolutely covered in cracks required a huge amount of time getting it into a reasonable state. After this, the paint was then done with many spray cans, hoping to get a reasonable and inexpensive paint job. So considering this was the first major body work I've ever done its not too bad.

Never the less a lot of cracks have re-appeared, a section on the bonnet has bubbled up due to lack of heat reflective material against the exhaust manifold and there are lots of thin patches.

I plan to have a second attempt over the summer using a proper spray gun, hopefully getting it to a more professional standard so any advise on equipment and techniques will be very useful.

Ooh I just found out the dome sticker people *can* do chrome/silver. I think it is the backing of the underlying vinyl.

I guess we then have to choice of domed or whatever sticker in a style reminiscent  of an enamel badge - or a completely flat Vinyl cutout.

That second one is very close if not perfect Neville.

My Son did take a long time to get it right.

Been a long time since the last update and lots of good stuff has happened!

Whilst having the whole body off for the re-paint a few other improvements were made, including a new role over bar, fuel tank with rear end reinforcement and boot floor and a new silencer for the exhaust. 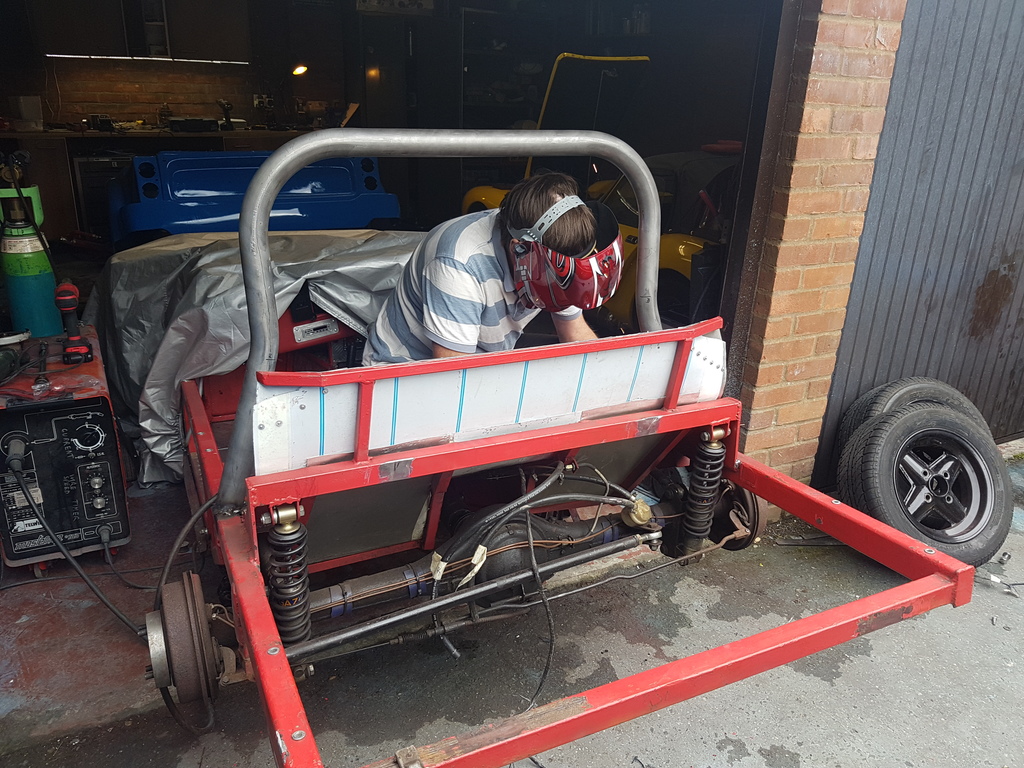 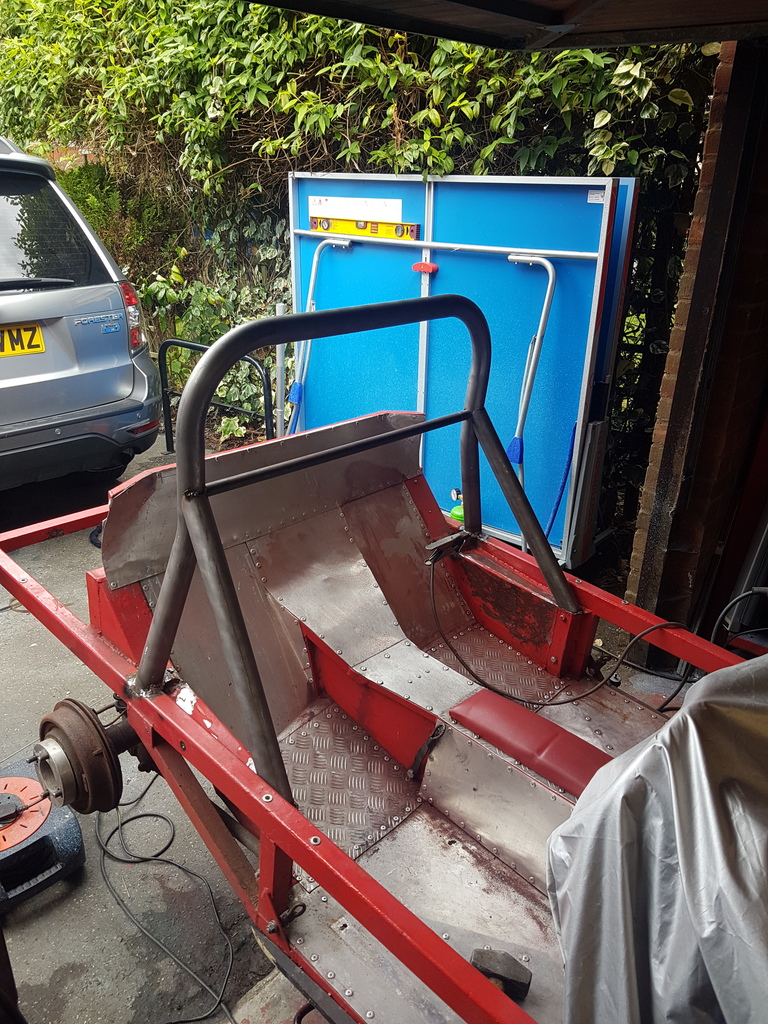 Does look too much different with the body back on, just a bit more beefier! 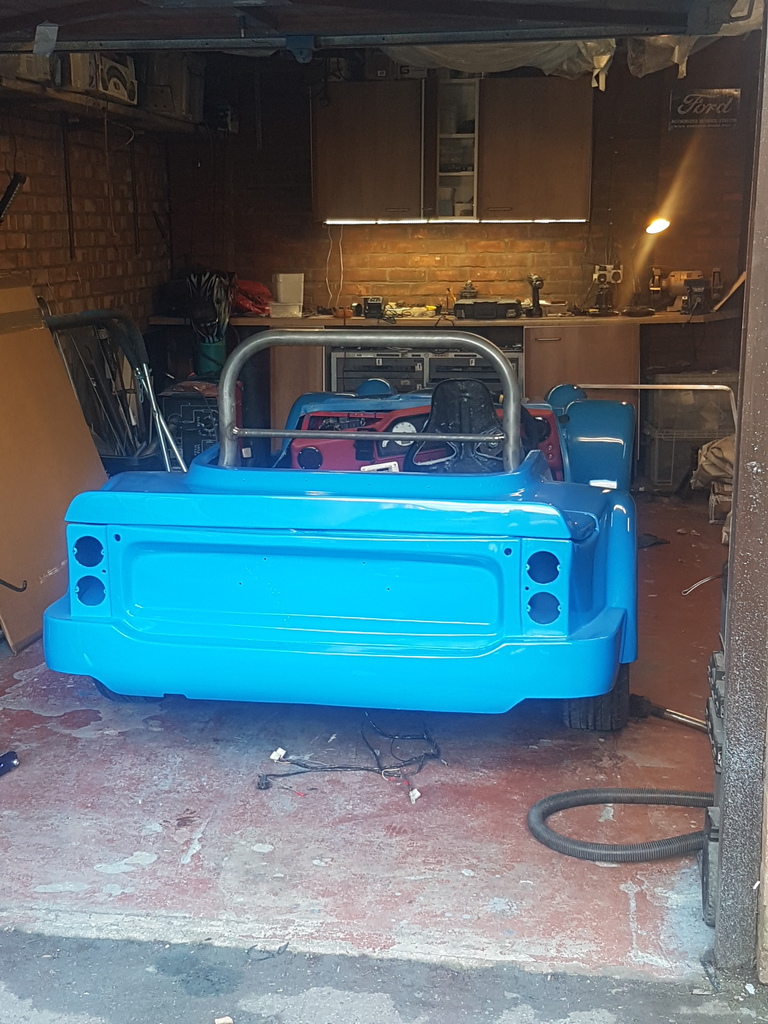 After lots of mulling over we decided to get a new fuel tank that would sit a lot further in the car, just in case of any rear end accidents.. It also gave us the opportunity to rebuild the boot floor on top of the rear end reinforcement which is massively better than the previous version. 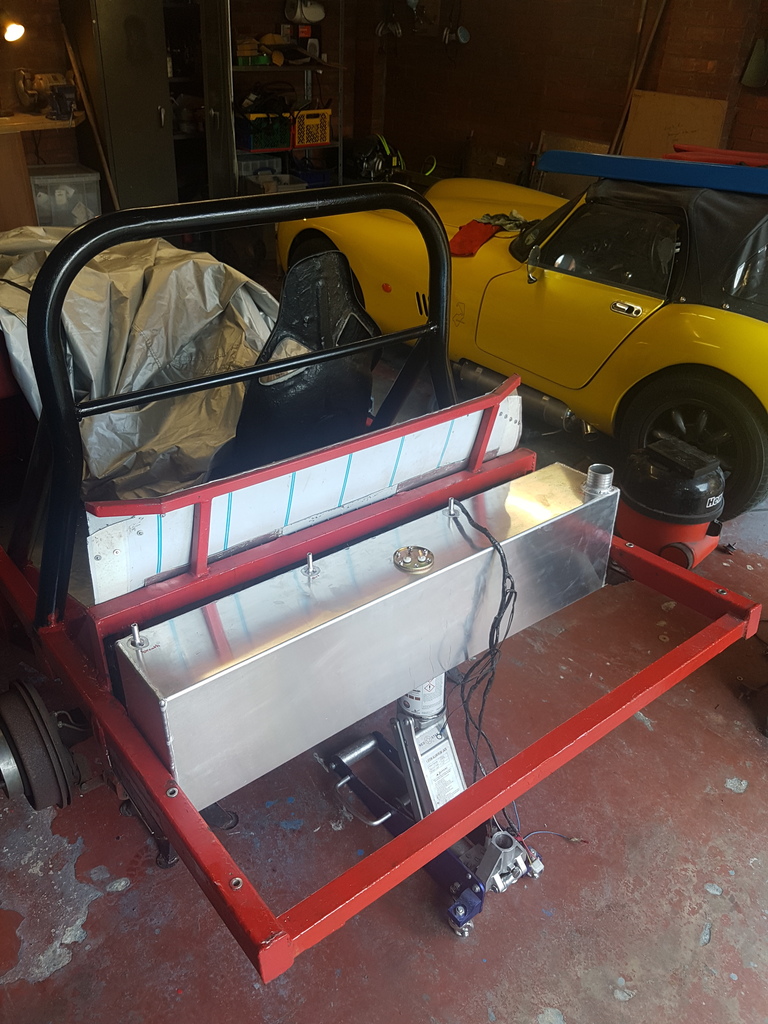 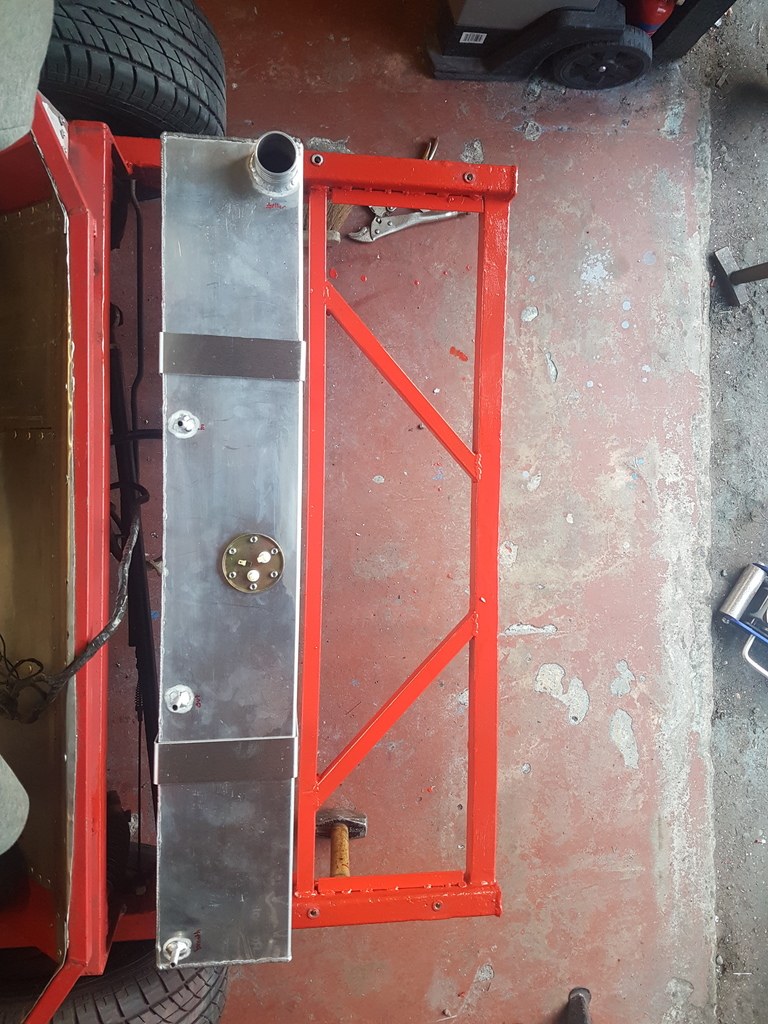 Wiring up the fuel pump and using it to transfer fuel from the old tank to the new. 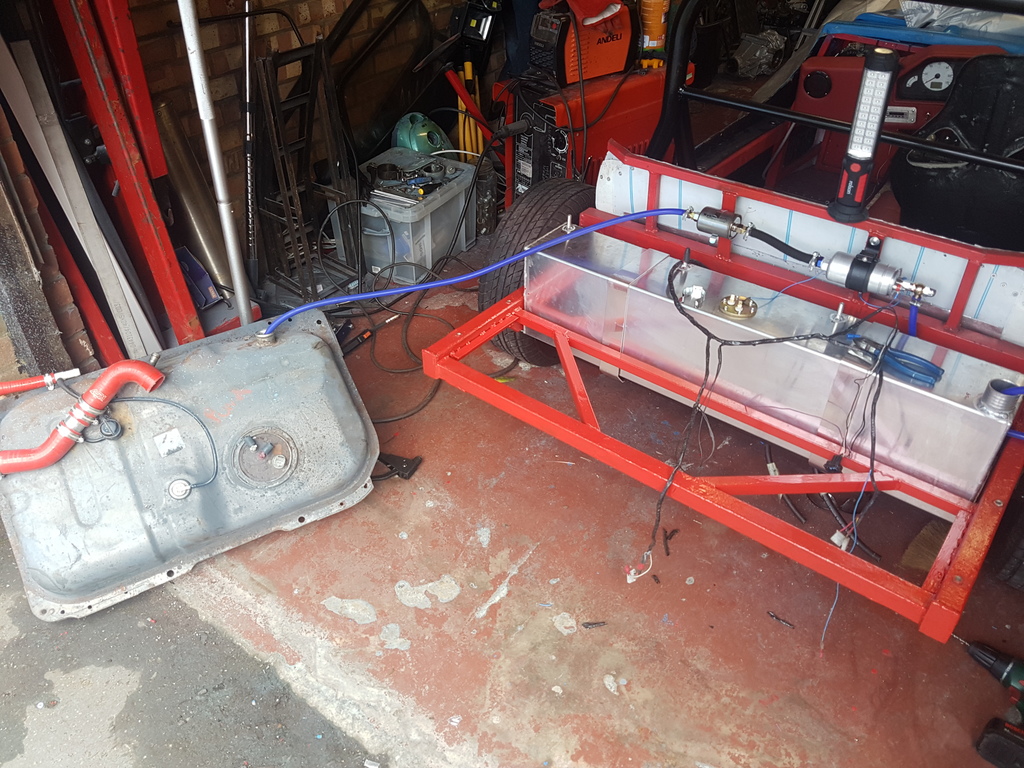 It has now all been completely paneled over along with the necessary holes for wiring and tank inlet/outlets. With the body back on we now have a completely solid boot space. No pics of the complete final version unfortunately... 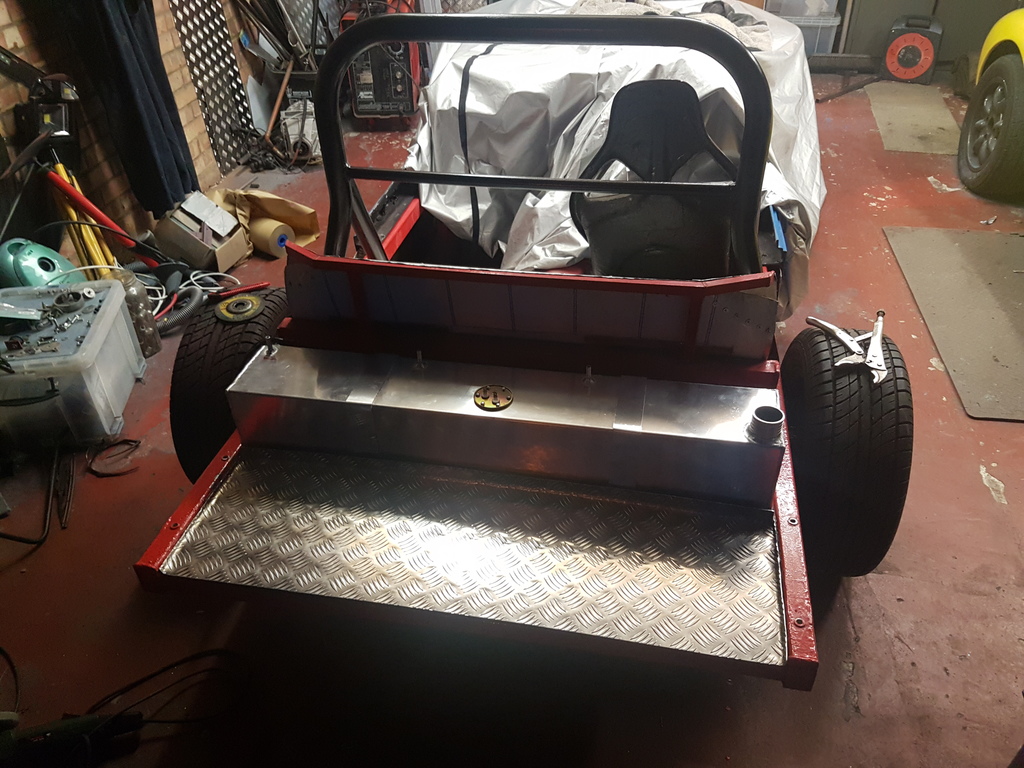 Stolen the silencer of dads Sylva Stylus muhaha. This isnt how it was finally mounted, it sits much closer and straighter to the body works and looks "right". 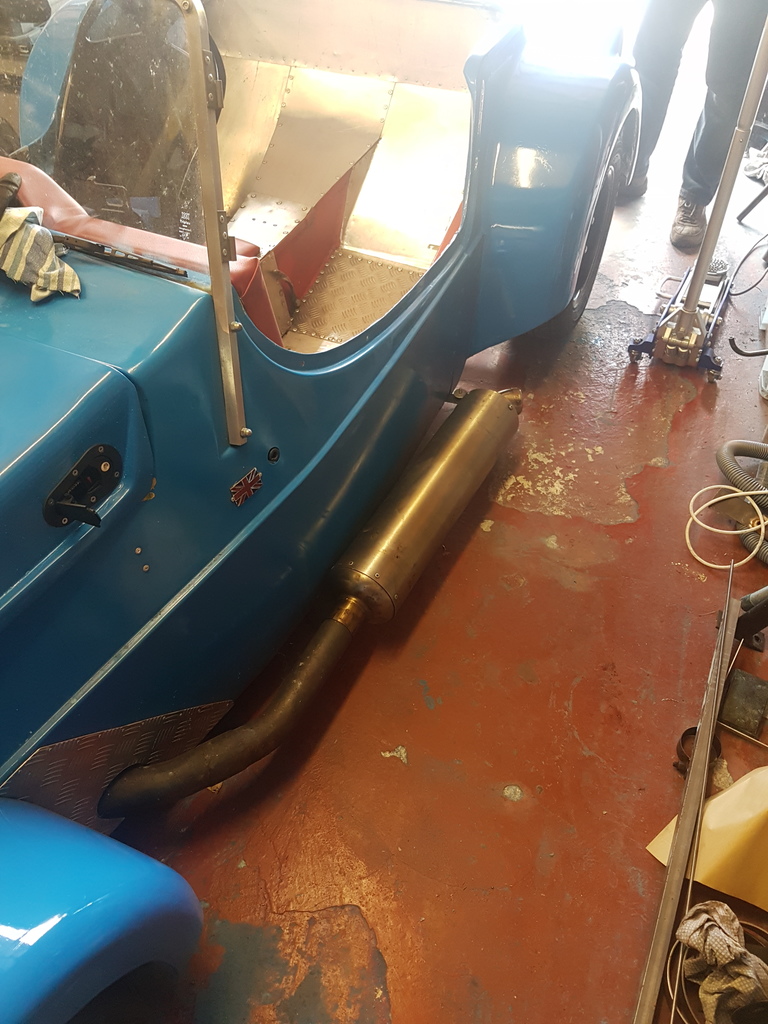 The car is 95% back together now but iv traveled back to Portsmouth for my last year of uni and have left dad to button up the last little bits.

Look forward to seeing you all at Stoneleigh!

personally i would have put the ally checker plate upside down in the boot to give the smooth side up.....

but overall it looks a really nice job.

We did think about whether to go smooth or checker ally but decided checker. Wouldn't think it would be a good idea to rivet checker side down directly onto the chassis.

i would have ground off a "lip" then put some sealer between the ally and steel... either the soft sticky  tape or some mastic.

That is looking good.

I like the idea of a roll bar that might be strong enough to really work. Where did that come from, or was it specially made? The tank looks a little larger than the original, I assume that you bought it. Is it foam filled? The reason that I ask is because I have wondered about a new tank myself, as part of an EFI upgrade.

Roll bar was specially made after lots of measuring by Tube Bender http://www.tube-bender.co.uk/ out of 2" 2mm thick tube 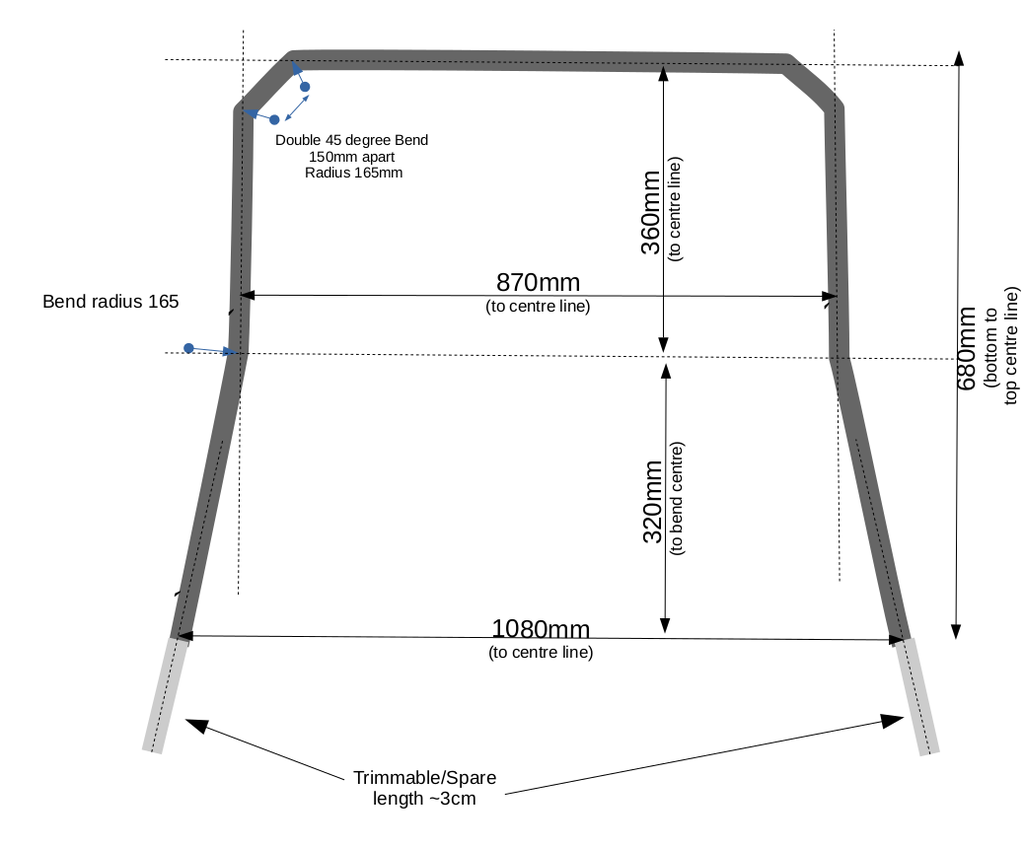 . 185+vat delivered. not specially cheap perhaps but very accurately made.

It's designed to stand on the main chassis rails on this S3. Also provided was tube for the forward facing diagonals although those were made to fit on the trailing arm boxes that we have here. Could have been rear facing but that would have been more truckth with the rea bulhead and bodywork that we have

Interesting facet was that he didn't have a 300mm radius bending mandrel - which is why i went for the double bend in the diagram. However when made it actually looks like a 300mm single bend anyway. I guess that's because 2 165mm 45deg bends 150mm apart are pretty much the same thing

Also welded onto the chassis - less hassle than bolted on.....

Quilte pleased how it came out - esp considering this was all done by email. Very accurate and the clearance to the body sides is less than 1cm so that's just as well!