After getting the Legerra home a few weeks ago, I have been using it as my daily commute. I have done a few things to it to 'improve' it:

1) I have removed the centre console because I could not take my foot off the clutch with it in place because I have to get my knee next to the steering wheel and my calf was hard against the edge of the console. I have still got to find a place for the dials and switches that were there. When removing the heater controls I found that the outer sheaths of the cables were not fixed, so moving the levers did nothing. I don't think that the heater control works at all. So that is another job on the to-do list before next winter.

2) I have moved the main instrument cluster up about 2 inches so that I can actually see the majority of the dial face of the speedo and the rev counter. The speedo is badly out of calibration - the mile-o-meter is currently registering about  3% low but the speedo is over 25% low. How can that be? It is a Czech dial, not the original Ford one so I guess that it must have always been wrong. I just have to remember that it is 900rpm per 20mph in fifth. Moving the instruments higher meant cutting the dashboard to clear the speedo drive. I now have a gap of about 2 inches below the instruments where I could site the dials and switches from the centre console.

3) I have removed the exhaust and welded up the holes where it seems to have leaked ever since it was fitted. I welded some patches made from bits of bike tube. It was quite difficult with my arc welder but I eventually managed to fill the holes that I made too. The exhaust is still loud and tiresome - it sounds really good when I rant it, but for the other 99% of the time it is an irritation. The local stainless exhaust place will make a bespoke system for £330.

4) I have replaced the original 13" cobra alloys that had 205/65 tyres with 15" wheels from a Ford Focus with 195/60 tyres. They only just fit in the rear arches and one touches the body occasionally over big bumps. The wheels were replaced because the old tyres had very poor grip in either the dry or the wet. The use of larger wheels increases the gearing about 11% and, more importantly, increases the ground clearance over local speed bumps - the exhaust used to touch before.

5) I have removed the radiator in order to cure a leak caused by the way that the electric fan was fitted using bolts through the radiator matrix. The fan had been moving up and down and wore a hole in the front of two of the cores. As a temporary bodge, I fixed it with Araldite. I'm going to weld up a frame to hold the fan in place and fix it on the radiator mounting bolts. I have bought a new in-line thermostatic switch for the top hose.

6) I had noticed that the car sometimes pulled to the left under breaking. I have now found the culprit - a leaking damper. It seems that the leaking fluid drips onto the disk when the car is parked and the brakes pull the first time that they are used. I will have to get the unit off the car to measure it to get a new pair. I don't know whether to change the springs too.

I still need to sort out the seat and I would like to move it back a couple of inches further but I think it is tight against the bodywork.

I also want to get or make a hard top or targa top - I can't be doing with struggling to get the soft top on and off all of the time, with all of those pesky poppers and the stiff locking pins at the front.

your lucky, both of my projects are currently on hold....because my cousin has said she is visiting us for the first time in 17 years and my wife is treating her like royalty....practically the whole house is getting a revamp decor wise and for the last 4 weeks i have been fitting a new bathroom and re-tiling it as a wet room.......how ever this week end will hopefully see it all done so project S1 will get back underway.

I have also been collecting all that i need to get the Legerra sorted so once i have my garage back it will also get fixed.

I actually took the Legerra out for a little drive today, the first drive of the year. It was really nice to drive such a responsive and direct car, such a change from the Ford Focus hire car that I had for work this week which just felt rubbery (oops, didn't mean to get anyone excited). The Legerra put a smile on my face even without driving it like a hooligan. Now it is parked up ready for me to give it some attention.

In the last two weeks I have done 950 miles in the Legerra - I was in Cornwall last week and in Stevenage this week. In Cornwall I had the top up most of the time except for the return on Saturday but this week the top was down all of the way to Stevenage and back and all the time that I was there, even overnight. The car didn't miss a beat. I lost part of the bonnet catch and the handbrake cable came out of its fixing, but that was easily fixed. Engine wise, there were no problems even in motorway hold-ups. My average fuel consumption was 37mpg with motorway driving being approximately an equal mixture of 65mph and 80mph.

Well, in a change to predictions, my Legerra passed its MOT first time! Maybe my welding is not as bad as I thought.

My Legerra is all back together now, ready for its first shot at an MOT on Tuesday - it runs out on Saturday.

It took as long to sort out the seat fittings as it did to replace the chassis diagonal. The trouble with the seats was that the fixing holes for the runners would mean that the bolts would interfere with the rear cross member, so I chopped the runners about and welded extensions so that I could put the runners where the chassis wanted them and I could get the seat to where I want it, which is about 3" further back than it was before. I can now get my legs straight, so a 3 hour drive down to Portreath in Cornwall should be possible.

While I was under the car faffing about with the seat fixings, I noticed that the exhaust was loose and one of the bolts had fallen off the alternator, so those are now sorted out to. Also the fuse had gone for the hazard flashers - I might not have noticed for ... weeks! 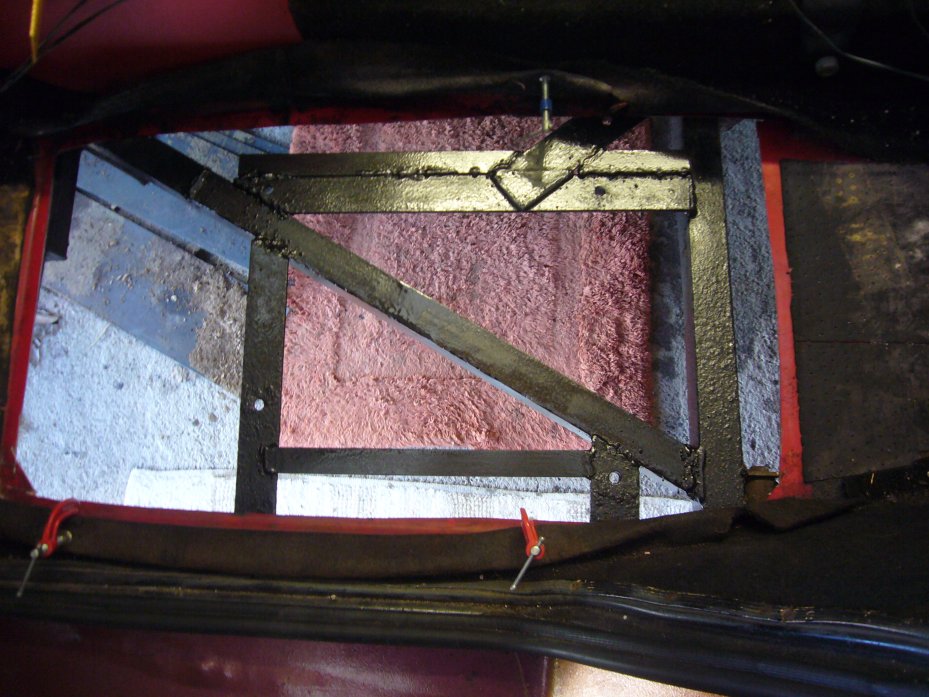 So all welded up, with some extra strips to go under the new seat runners. The new section is 3mm thick, as are the strips, so they were easy to weld with my arc welder. I used my new MIG to do the two ends of the tube. I had just about got the hang of it by the end! The underneath didn't look to bad (I thought) but we will see what the MOT inspector thinks next week. 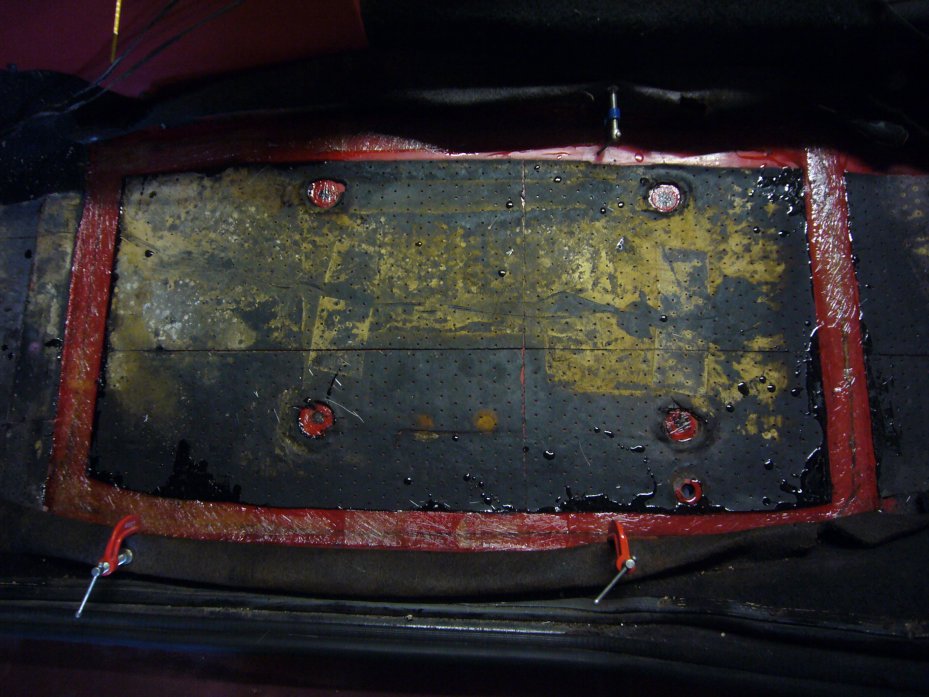 And then the floor glassed back in. The G-clamps are to hold the carpets out of the resin. Just need to fit the seat now.

After spending too much time fiddling with my Rickman Ranger, I have finally got around to doing some serious work on the Legerra again. It has its MOT due on 10th August so I needed to get on with the chassis repairs. It has taken me all week to actually get the garage clear and to get the Dutton into the garage and on blocks. Today I actually started on the job, after all of the preparations. 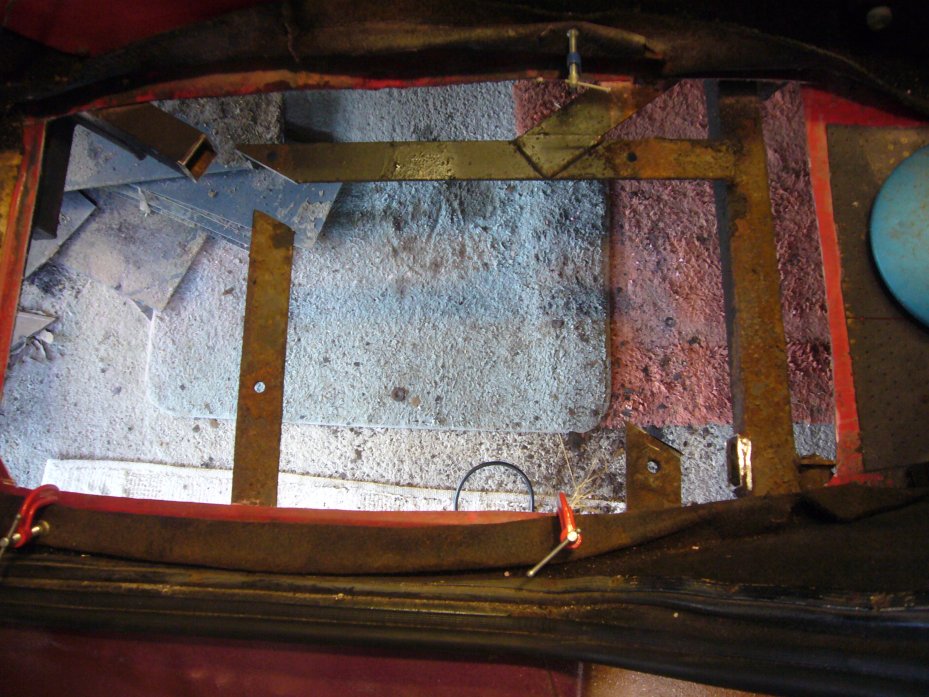 You can see that I made good progress, mainly by investing in a set of cutting wheels for my angle grinder. I bought the cutting wheels when I was at the Exeter Kit car show last year, which just shows how long I have been putting this job off for. When I did the other side last year I used a manual hacksaw - what a sucker! This time I had to grind off two of the seat fixing bolts as well but the whole job only took a couple of hours.

I need to cut the replacement box section which is actually two pieces of angle iron welded to make a box. Then the new seats have different runner and fixing positions so I will need to add a couple of flat strips for those. Then it will be happy days!

I have some chassis rust that needs sorting before the MOT in August. I hid it with a sheet of ally last year - I used the same sheet of ally that hid the problem when I bought the car last year. It was added by a previous owner to hide the problem in order to get an MOT to sell the car. He also sold the hardtop separately to someone else.

Following on from a fault free trip to Stoneleigh, I took the Legerra down to Devon on Friday to Cullompton to look at a car, because my Omega now isn't charging the battery and left me stranded a mile from home. Anyway the Legerra ran fine there and back, which is about 140 miles. However the soft top kept on coming undone so in the end I just took it off. I didn't really have the right gear for top down as it was a spur of the moment thing but the car behaved perfectly. That is over 400miles without mishap. If I get this other car then the Legerra is due to have some chassis work done on it, so it'll be off the road again.

At Stoneleigh I was given a shocking pink T-shirt and a key ring. The T-shirt says "HANDBAG LEGERRA" on the back in 2" high lettering, just in case there was any doubt. Thank you Daryl and Martin!