So, has anyone done the removal of the Escort Mk 2 thing?

I can see you can get a thing called a compression strut for Escorts that replaces it and faces backwards - might not fit a phaeton chassis...

If anyone has done this I'd be most interested.....

They go forward and fix to the ARB mounts. Nick Carlin has them on one of the Legerra's but I don't think its back on the road yet.

They do appear to have shot up in price since I last looked (like doubled!) but it shouldn't be too hard to improvise using the compression strut brackets, some rose joints and a cut down roll bar.

Looking into this again.

Tension Struts do seem remarkably expensive (~275 at Burtons etc) and also rather complex, presumably so as retain the TCAs. The kts also include chassis mounting brackets which would probably be no use.

However since on our cars the TCA (usually) needs a bracket welded to it for the coilover, which is sometimes frowned on, it all seems a bit unsatisfactory compared to a (hopefully) fairly simple lower wishbone to replace the whole lot.

The first thing to get right is the lower ball joint. I've just tried a Sherpa track rod (QUINTON HAZELL QR1774RHT) onto the hub. It might do, but its taper does seem very slightly smaller (maybe 0.5mm in it, although difficult to be certain even with a micrometer with the rubber gaiters in place making it difficult to get to the bottom of the taper on the Ford TCA). It would do I think, as it does tighten up, although I'd prefer to be more certain. However its main thread is also enormous maybe 18.5mm (haven't worked out what thread it is yet) - so all in all maybe a different one would be better.

Other than that it's all looking quite easy with a bit of tubular steel and mimic the upper wishbone complete with its Triumph bushes. The front lower wishbone mounting bracket can be locost style (as can the lower coilover mount) mounter as far forward as possible on the chassis and level-ish with the rear mounting. Well below the ARB mounting.

Maybe sounds quite complex but I don't thinks so and the only change to the chassis is the addition of two brackets.

Benefits are Caster adjustment, antiroll bar removal, Lower welded TCA bracket removal, and enabling the front to tip right over. I reckon it should be possible to do the whole thing for ~£75 including ball joints and new bushes.

Why not go Triumph full stop. Triumph lower wishbone, simple plate to add ball joint, therefore eliminating trunnion. then you need a hub carrier, I do find the triumph hub with the ford stud adapter bloody heavy and that must affect the un-sprung weight some what. Bit more thinking on this, got me interested as I have made many lower wishbones for kits and "others", Used to follow the Haynes one mainly. Maxi joints then I think. Could do with a modern make over before all the spare joints dry up.

just had a quick I remember, memory moment. Last one's I built were for a one off hill climb jobbie had VW Golf lower joints, Mk4. and cheap as well and adjustable 3 bolt fixing flange.

Thanks. Almost a great idea about the triumph wishbone (could that fit an S3 chassis?) but I want to retain the existing Ford based hub & brakes etc - they were expensive.

Do you know if the Golf ball joint fits? - mind you I see they're cheap enough to buy on spec, and hope. Still it'd be nice to know.....

Some bits of progress

It was hard to tell for sure as the gaiters get in the way of seeing properly. So I had the idea of marking the taper with a marker pen and then inserting it into the hub and wagging it back and forth a bit. You can see the marking in these pics - and that (importantly) it has worn off in the second pic, proving that the taper was in contact all the way up. Note that the reason there is a still a bit showing at the end is because the taper actually flattens off back to a normal cylindrical profile 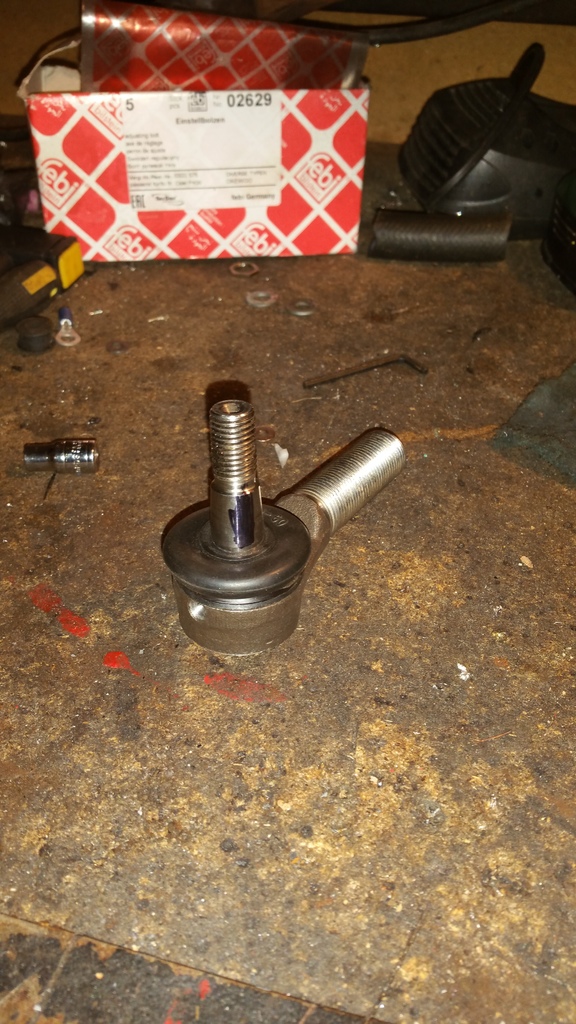 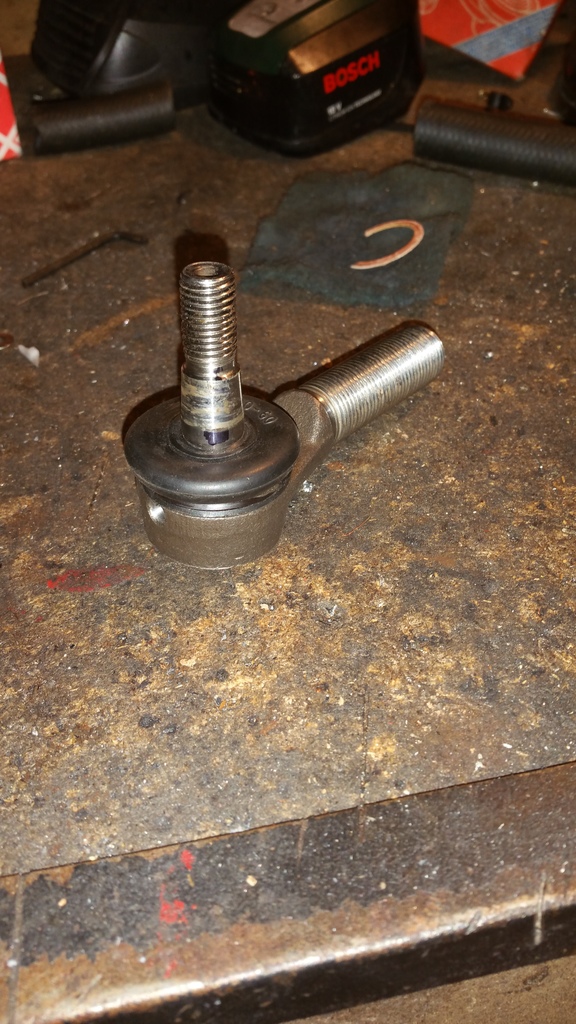 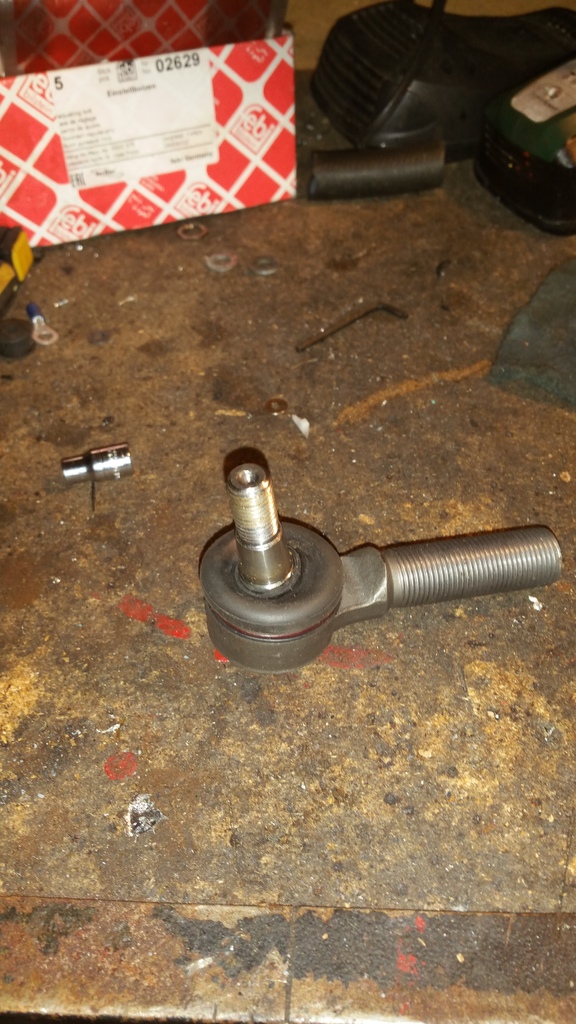 A wrinkle in this is that I have two of these QR1774xxx. One (the one in the pics) is the LHT variant with a left hand thread, The other is RHT, right hand thread and the taper is made differently, with a step at the bottom. You can just about see itin this pic. That shouldn't matter - just as long as it's not the step that makes contact with the hub, rather than the taper. There's no reason this should be any different. But just to be sure I think I'll get another RHT and see if it's the same. I'd prefer not to use the LHT left hand thread version

Incidentally, someone might be interested in the whole hub arrangement so here is another pic of that. I put these together from a pair of Mexico struts, Alloy hubs from Burton Power (which you cant actually see), vented disc conversion, also from Burton power which is fortunately only 25mins away from me. Oh yes and RS2000 steering arms 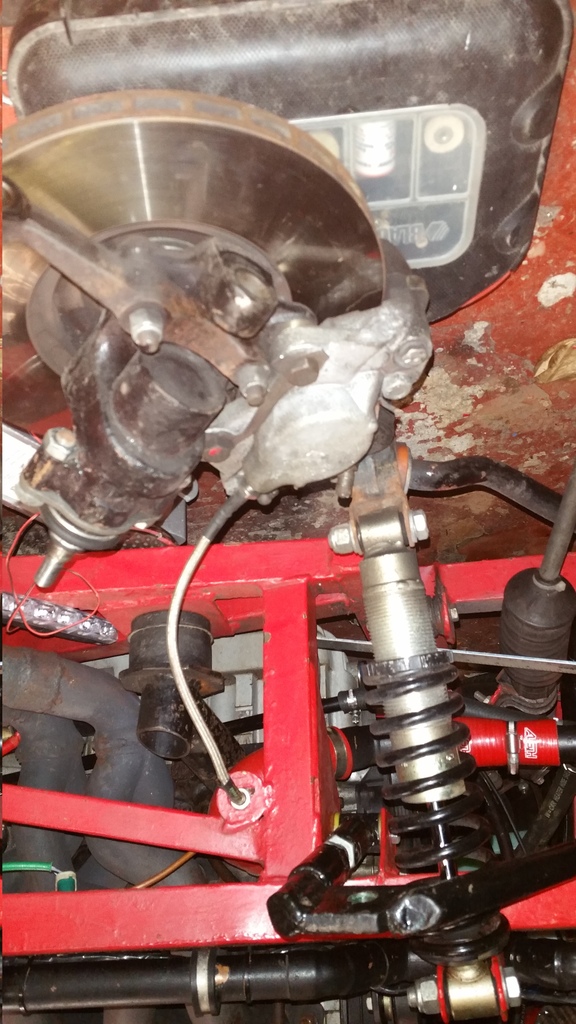 .This is why I didnt want to swap hubs!

Whyis the pic upside down? Oh well you can still see the hub!

good work ! it would be even easier if you did it the right way up :-)

vented discs are unnecessary....you car is too light to cause the discs to get too hot even when used in anger.....vented discs do not give better stopping power, they just dissipate heat better......when its needed unless you track day the car every week your just increasing the unsprung weight for no gain....and a slightly impaired handling car.

Oh yes and I did try the Maxi ball joint that's used at the top. It's much too big for the bottom of the hub.

So It'll be Sherpa ties rod ball joints then.

D'oh! I should have realised. All this worry about ball joint tapers was unnecessary. I should have remembered that the Sylva Fury/Stylus uses the same hub setup without ARB and I've got one of those in the garage already!

The correct Lower Ball joint for the Escort Hub in this ARB-less arrangement without the original TCA is indeed Quinton Hazell QR1774RHT.

Well having 'solved' that problem I just need to get some tubing and (enormous) threaded tube to screw the Ball joint into.

As that joint is threaded, it will also enable Adjustable Camber.

I think I have decided against using wide chassis brackets and spacer washers to provide Caster Adjustment as there is not enough width on the original Escort TCA chassis mounting.  So I shall leave that to the (already) adjustable top wishbone.

As for the chassis brackets and wishbone tubes/bushes I hear Locost parts calling.