My wife just bought a Hyundai Atoz the other day because the owner had taken it to several garages and was told that the car was beyond repair engine management wise and the owner would have to put up with it stalling and juddering whilst driving.

It had a years new MOT and 6 months tax, is in pretty tidy condition a 1998 reg, and only 48000 miles on the clock.....all for the grand total of £150 an absolute steal if i can sort it. Looking under the bonnet it was obvious that the M.A.P. sensor, the TPS (throttle position sensor) and the distributor plug had all been messed with. A quick look on the internet reveals that these three sensors are known fail points on this model of car, so i decide to delve deeper. Well since its been to several garages and its incurable so what harm can it do?

First of all the car had 3 MAP sensors in the glove box area and one TPS so there is clearly a problem there. All three sensors have insulting tape arround them so that comes off and this is what i find on the MAP sensor wires.. 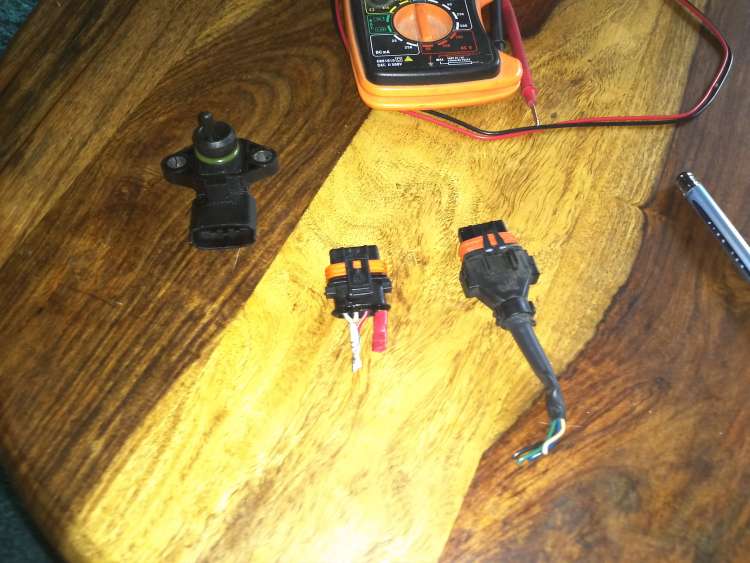 the MAP sensor is on the top left followed by the map sensor connector plug as fitted and one i got from a breakers yard from a different Hyundai that had the same plugs on it. the crimped connection didn't even have the wire attached.

So i soldered the replacement connector on the loom and refitted it, 90% of the bad running issues solved, except that to get the car to run with the knackered MAP sensor wiring the car had its throttle stop screwed all the way in, so when the car started it "ticked over" at about 4000 rpm now that the MAP sensor works....also the "mechanic" who worked on the car screwed the mixture control (air bypass screw) all the way home....very tightly.

Anyone who thinks they know anything about cars would know that when you fir a new TPS sensor you need to clean the throttle body to make sure that its fully zeroed when fitted......you would hope anyway, it took a good hour to get all the crap out of the throttle body, but when done the throttle no longer sticks closed. the TPS was refitted and It started, ticked over and runs well....99% of the issues cured, if i can find the specs for setting the sensors it will be about perfect.

So for me it was a result, but what was the "mechanics" who worked on and charged money for this car doing? well apart from supplying my wife with a really cheap car.

well i spent the morning cleaning the idle control valve with carb cleaner, it seems to have made a difference. so i will keep chipping away at it.

My sierra however is due its MOT next Saturday, not a problem as i have been working on sorting problems for the last few weeks. The problem today was curing a blowing exhaust.....simples i thought, except that the middle box was too rotten to weld to, so i had to buy a new exhaust box from my local discount exhaust centre and cut it about to get it fitted....its on but every joint leaks so tomorrow it comes back off and they all get sealed with fire gum. the car does seem to be running better though.......

When i took the Sierra for test this spring i was greatly amused to see the tester squeeze the inner and outer sills together to check if they were rotten, and he wasnt a young bloke !

It was funny when I took the Legerra in once and the 'mechanic' had the apprentice looking for the diagnostic plug deliberately...

"No such thing as a mechanic these days, they're all fitters, if the laptop doesn't find the fault then it can't be fixed. Unfortunately most garages suffer from CBA (can't be arsed) syndrome when it comes to doing some real work."

Main dealers may be but all the 'local' garages I know do all the mechanical stuff - probably 'cos the main dealers won't! and at a good price, been hardly worth me gettin' my hands dirty these days.

mixture screw.... air bypass not sure what it is called it allows air past the throttle plate...cor i am out of touch been messing with carbs and duttons too long.