I went to the KitNet track day at Castle Combe today in my Legerra. It was cracking weather and I had a good day. There were positives and some negatives. So starting with then the positives: My new tyres performed well and took 5 seconds off my lap times (down to 1m 35sec), I finally got the Legerra over the ton at 100.3mph on the straight, I met a load of nice chaps and did a lot of chatting plus, to round off the day, I drove it home at the end of the day. Two of the chaps were Duttons - but don't ask me their first names because I don't remember.

I spent all day yesterday preparing the car for today. I didn't manage to finish fitting my new seats so I had to revert back to the old ones. The new ones hold me better so I wouldn't have to brace myself in corners as I do now. With all of the extra grip from the tyres (Toyo Proxes R888R's) then the steering forces were quite a bit higher and it was quite a workout.

They say that racing improves the breed but it only served to find weaknesses today. I lost 2 of the bolts off my alternator, so had to grovel around under the hot and oily car. Luckily the organiser had a good selection of bolts in his support vehicle. 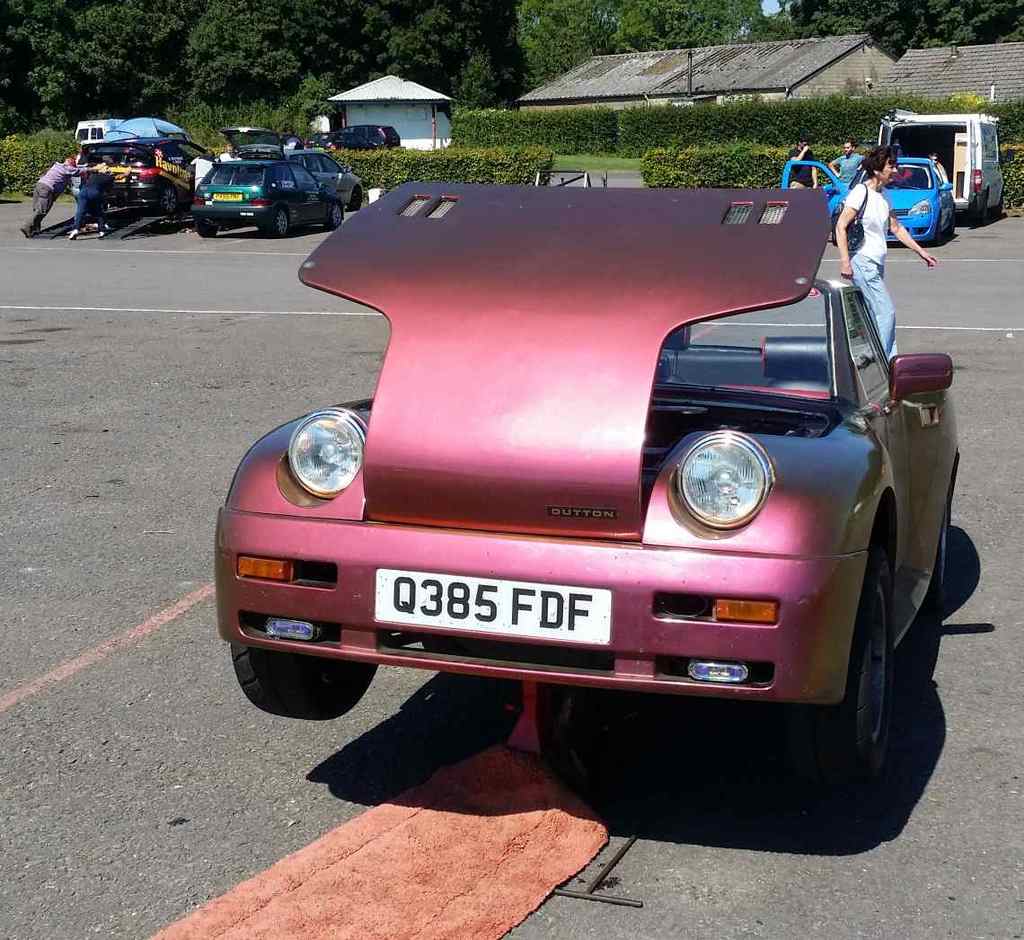 I also had to remove the windscreen wipers because the wind was blowing them across the screen.

I had part of the brake light switch break off.

I also had a heater hose come off when I parked up, so I had to get the jack out again to remove the front wheel to get at it.

My day finished a little early when the car developed a 'misfire' which doesn't appear to be an electrical problem. So it now sounds like a Subaru. The 'misfire' didn't just happen, or I would have noticed the change, it just developed. I rather fancy that it got a little worse on the drive home.

It could have been worse: early on in the day I managed to get 3rd instead of 5th on the straight and saw the rev-counter returning from over 7000 rpm. That could have been a bit of a mess but it survived. I also found that I had to watch the revs because it didn't feel like it needed to change up until over 6500 (yes, that happened a few times).

So, overall it was a good day. I enjoyed the driving, the mechanic-ing and the racing. And I enjoy having the aches, up to a point. I am a bit concerned that my 'misfire' might be something more serious but that'll give me something to do over the winter.

Last night it was a bit late to be running the Dutton, so today I replace the plugs, points, distributor cap and rotor arm because all of them were looking rough and then ran the car for a few minutes to get it up to temperature before doing the final stage of the head tightening.

Unfortunately, today I am getting water leaking for the front of the engine somewhere. I can't tell where it is coming from but it is coming up on the cam belt, on the inside (toothed side) and then getting sprayed by the cam pulley. I haven't touched the water pump in this episode, and it was replaced 3 years ago, but I can't think where else it could be coming from. Replacing the water pump gave me a bad back last time but I already have a sore back right now, before I've even started on that. I might have to get it done for me because I am supposed to be taking it to the Kitcar Summer fun day at Castle Combe next Saturday.

I have been making rather a meal of getting the car back on the road, even by my standards!

I discovered that I had assembled the engine with the cam 180 degrees out of phase, so I swapped the HT leads over. I had forgotten that I hadn't set the cam belt tension, but I think I got away with that one. Still the car wouldn't start. I tried for a number of evenings - it would fire half-heartedly and then give up and I'd flatten the battery, then leave it on charge for the next evening.

Tonight I peered down the carb (to check that there was fuel in the carb when I operated the accelerator pump) and there I discovered a small hex screw, which was jammed between the emulsion tube and the wall of the primary venturi. It is one of the 4 screws that hold the air filter onto the carb (I was surprised to see only 3 in place when I removed the filter a week or so ago when I wanted to pour petrol down the carb. I thought it odd that one was missing because I didn't remember that from before)

The screw must have been there the last time that I drove the car, which was at Castle Combe. I think I was rather lucky that the screw head was too big, otherwise ... well, it just doesn't bear thinking about!

This evening I discovered that the ignition timing was still way out. Once that was sorted then the car started. All's well that ends well. 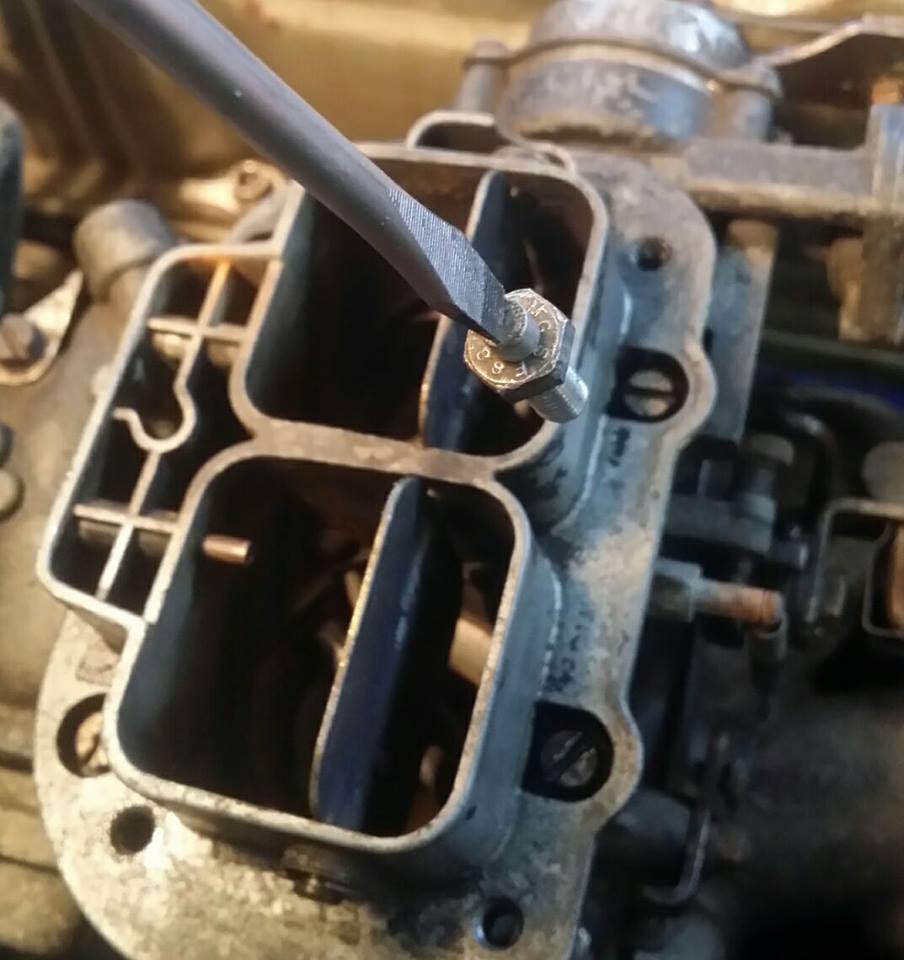 So, with the pressure at work finally easing, I have finally had a weekend off. I finally got back in the garage this afternoon and picked up on where I had got to on the Legerra. I have been replacing the cam follower mounting posts for longer versions - they are 7mm longer. The problem with the standard ones is that with a high lift cam (where more metal is removed from the base circle) then the posts need to be screwed out further, leaving less thread in the head. This results in them working loose - which is what happened to mine at Castle Combe.

So after spending an hour or so finding my tools, I managed to replace the posts for 3 cylinders in the hour or so before my back was too sore to continue, it is quite a long reach to get to the engine from the side of the Legerra. Another couple of hours and I should have the car back together... just in time for another trip to Castle Combe!

Then cover it up with the old oily rag trick :-)

Thanks guys. I have wire brushes, including brass ones. I might remove the cam followers so that I can put loads of blue industrial kitchen roll to catch the debris. It might be quite therapeutic to polish the lobes up. Interestingly, the lobes are worse than the base circle - I wonder if that is anything to do with the micro-structure of the steel, or maybe just that they stick out and get more condensation!

The Sierra cam looked like that when I first fitted it into the car. I used a small brass brush and a big wad of kitchen roll, a bit of 3in1 helped.

Best to clean the lobes up gently with a rotary wire brush, you will probably find that the rust comes right off. just dont let all the spoil go into the oil ways.

I'm really fed up. After many months of delay, due to building a new garage for my new Dutton, I finally got back to the Legerra. I had nearly finished getting the cylinder head back together before the garage started but I'd not adjusted the cam followers when it was overtaken by events. Now when I finally got the car clear of other stuff, I lifted the bonnet ... and my heart sank. This is my high-lift cam that I fitted 2,500 miles ago.

Do you reckon it'll just polish off with a little running, or is it fubar? If I'm going to need a new cam then I might go for a hotter one with a bit more top end, rather than this high torque one.

I had a bad back for over a week. Then that V6 came up and I fitted a towbar to my Hyundai and retrieved the car from Sheffield, and did my back in again in the process. Then I had 3 days in Rome on business. This last week I have been a bit under the weather with a mild cold and I do keep falling asleep as soon as I sit down. All pretty pathetic.

So I have now got the cylinder head back on the engine and I just need to get the bolts re-torqued after I have run it for a few minutes. It has taken me 5 weeks to get this far! I have all new valves and they are lapped in. I fitted some stronger cam-follower retaining springs to stop the little devils jumping off their posts again.

While the head was off, I measured the position of the inlet valves when fully opened by my high lift cam (Kent FR30) and discovered that the valve protrudes 3.1mm below the mounting face of the head. The pistons come virtually flush with the top of the block and the head gasket compresses down to little over 1mm. So a cam belt failure could result in about 2mm of metal to metal impact if the cam stopped in the wrong place.