Hope this will be of interest to some of you, especially those who took the time to share their experience to help me out.  A quick recap.  I bought an S3 Phaeton in Autumn last year that was running, with MOT and a good basic spec.  Probably paid too much but I wanted a runner to work on rather than the B+ Malaga sat in bits. 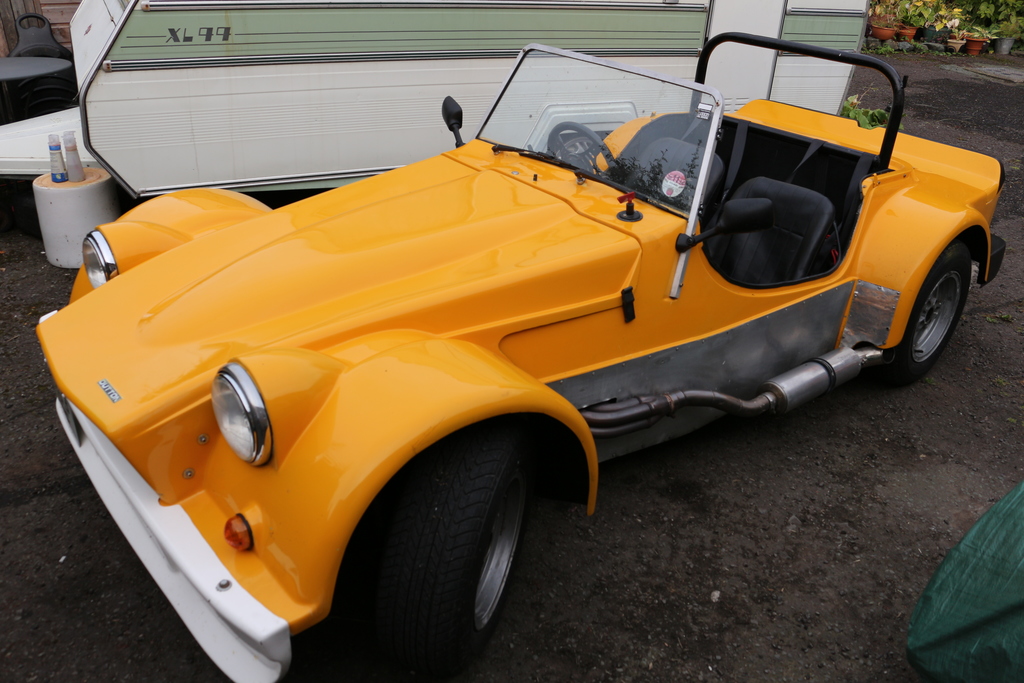 * Re-setting suspension.  I adjusted height up to as close to 6 inches ground clearance as I could get and reduced the damping significantly.  This combined with changing tyre pressures to 18 psi from 30+ has completely transformed the feel and comfort.

Over winter I couldn't muster the enthusiasm to brave the cold garage so the next work waited until spring.

This year the first job was fitting decent seats.  I am around 6'1" with relatively long legs so the standard seating position is not good.  I had hoped the 5 link setup would give me plenty of scope and this was a plus point in choosing this Phaeton.  Unfortunately the front mounting points on my set-up is where the original front spring mount so I could not just lose the whole box to widen the cockpit.  After discussions on this forum I ended up narrowing the transmission tunnel, minimsing the boxes and reducing the intrusion of the mounting points.  In my rush to finish I didn't take any photos - I'll try to post some soon.

The seats are UK made, fibre glass shells with removable cushions. 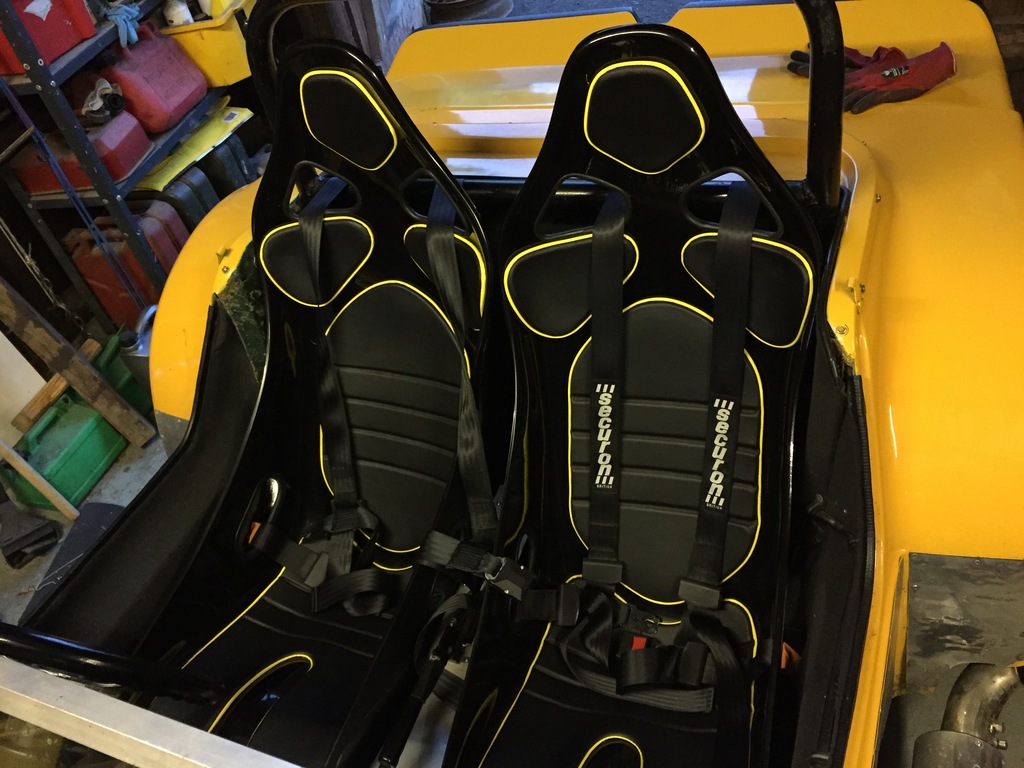 They include the normal threaded holes for mounting but these don't line up with the steel chassis strips under the floor so I welded up steel tubular subframes with captive bolts welded in so I can fit the seats single handed.  This took ages!  lots of pondering and measuring to line bits up.  I mounted the passenger seat in a fixed position far back so it is always behind the drivers seat for better elbow room.  The drivers seat is on low profile runners (both sides locking) again with a custom subframe.  The seats are a VERY tight fit in the cockpit and give rise to squeaks where they rub.  However they do allow much easier entry and exit and are very comfortable over a long run with a driving position which is just right for me.

I had a list of jobs to complete before my first planned "event" of the year but had to shorten it (what a surprise).  I did manage to;

*  Fit a new thermostat and a new top up hose.

*  Modify the dash (I plan a new one soon) including some captive nuts (rivnuts) so I can fit/remove more easily and to give more clearance for getting into the car.

*  Replace a rear indicator.  The original fell out and on inspection I saw the others were held on with just one screw and a little clip.  I made up aluminium strips to bridge across the mounting holes for both indicator and tail light so they can't fall out.

A quick shakedown run uncovered a leaking core plug - cured after finding a wholesale motor factor a few miles away - however it took a surprisingly long time to remove the old plug and particularly to fit the new.

I then drove to have tyres fitted (the old ones were old) in town and overheated within 5 miles!

I did make it there and back convincing myself that the guage (it is a not fully working digital dash designed for a bike) was faulty - the oil pressure stayed constant.

However a later check showed a large loss of water - and this was the day before the planned charity event at Prescott hill climb.

I decided on 2 changes;  Firstly I removed the thermostat completely (I will replace later once everything is sorted).  The other idea came after carefully looking at the front of the car and realising that maybe 1/3 of the radiator was exposed to airflow.  Only about half is in the bonnet opening and much of that is shielded by the oil cooler.  This really did not give it a chance.  So just before heading off I cut large holes in the air dam (photos to follow).

I drove the c. 100 miles in convoy with my neighbour in his Morgan and the temperature never went over 75 so I need to re-fit a thermostat.

More updates over the weekend if I don't get distracted!

Comment by Dave Adams on June 1, 2015 at 21:04
Cooling.....
laminar air flow does not cool as well as turbulent air so a rad grille could well help.
DUCTING.....if the air coming through the grille is NOT ducted so that it HAS to go through the radiator it will not go through! .....the air will just escape out the wheel arches.
The resistance to air passing through the radiator is the same wherever the oil cooler is positioned. (Front or rear) same with fans.......

Comment by Mark Bagnall on June 1, 2015 at 18:35
Graham, a couple of good ideas - I hadn't thought of moving anything DOH. Raising the radiator might make it easier to fill the system as well as forcing more air through. I'll have a look how long the oil cooler hoses are and what the runs would be like. Thanks 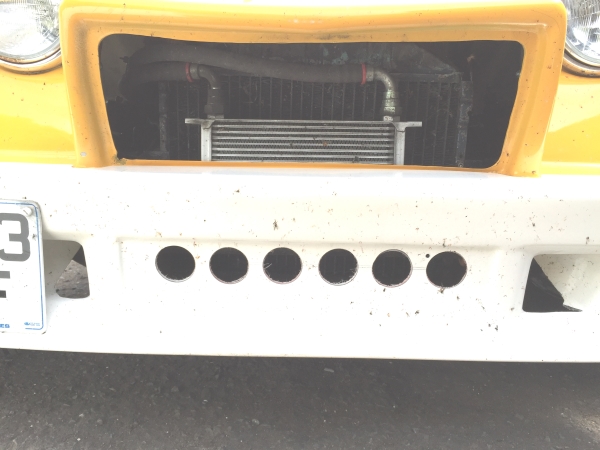 Thought this an interesting view showing how little radiator is exposed to cool air.  Made worse by not having any panelling to direct or force airflow through the radiator.  The 6 holes were a quick fix which has helped stop the overheating.  Plan to add some panelling - at least it is on the list of jobs.

Can we move this to the Prescott blog?  I'm not sure of the correct "form" being a beginner at this but probably should try and stick to details on my Phaeton here

Makes life interesting Mr Heasman - plus as there is strictly no time measurement the entertainment can go on - debating who "won".  Maybe we need spectators awarding marks for style?

James - I don't know about the head although I might find out if it has hardened seats in a while as I'm using unleaded (high octane where possible).

I do have an old rolling road print out showing around 100 bhp at the wheels - so its just as well the the driver has such a large influence, should level things up with all these high powered cars about ;)

2037 cc pinto running a DGAS (or will be in a fortnight) 5 speed box and 3.54:1 diff. Got a few bits to see to but i'm quite happy with current performance despite it never seeing a rolling road... yet.

1700 crossflow, cammed and with twin 40 Dellortos sounds like it'd be pretty quick Mark. Has the head been worked too, do you know? They used to get 130bhp out of engines like yours and road tests would post 0-60 times of around 6 seconds. So I think you should be in with a good chance, if you dared risk your means of getting home.